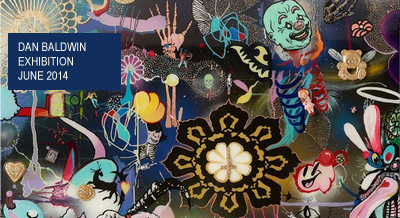 MOVE OVER DAMIEN HIRST… could this be the next best thing?

His work is internationally collected by an exclusive clientele. He has exhibited his paintings, prints and ceramics around the world. He has enjoyed a stream of critically lauded, sell-out solo shows and presented his work at art fairs in Basel, Miami, L.A, Tokyo, San Francisco, London and New York. In June 2014, the Turner Barnes Gallery hosted a solo show by Dan Baldwin, showing a collection of 12 stunning, limited-edition prints, based around life, harmony & balance.  It gave our clients a wonderful opportunity to see, and invest in, these sought-after works.

He has worked with brands as diverse as Atomic Skis, Max factor, Sara Berman, thisisalimitededition.com and with Paolo Nutini on his comeback album campaign of 2014.  In July 2011 he featured on the cover of Art of England magazine.

He is in the permanent collection of the Groucho Club and Cafe Royal.