Patrick Hughes artist was born in Birmingham in 1939 and grew up with no formal art education and was mostly self taught. At a young age he began to become fascinated by optical illusions. When sheltering under the staircase from the German bombs in the Second World War he was taken back by the reversal of the stairs normal self.

Patrick Hughes artist first solo show was in 1961 at the Portal Gallery in London. He then became a Senior lecturer in painting and drawing at Leeds from 1964 – 1969. Patrick has held several one-man shows particularly at the Angela Flowers Gallery and has participated in various group exhibitions in the UK and Europe. His work is in several private and public collections including the British Council, the Victoria & Albert Museum and the Print Collection at the Tate Gallery. In 1979 he won first prize at the Tolly Cobbold/Eastern Art National Exhibitions. His first one-man exhibition in New York was held at the Edward Weston Gallery in Soho in 1983.

In the 1970s and 80s Patrick Hughes artist was inspired by rainbows, ‘A rainbow is a transitory event composed of water, air and light. I tried to give it a mass, permanence and personality.’ Hughes rainbows are the reverse of the romantic: hard-edged, leaning against walls, emerging from dustbins, posted through letter-boxes. They exemplify those qualities in art which he cherishes above all: the paradoxical, the absurd,the magical and the poetic. Hughes’ surrealistic leanings have been influenced by artists such as Paul Klee, Marcel Duchamp and Rene Magritte.

Patrick Hughes artist is also a writer and philosopher having published three books on wordplay such as More on Oxymoron (1984). More recently Hughes has become renowned for his reverspective work, these works have been exhibited in London, New York, Santa Monica, Seoul, Chicago, Munich and Toronto. These reverse perspective works are three-dimensional and play with perspective through the reversal of concave and convex. He lives and works in East London. 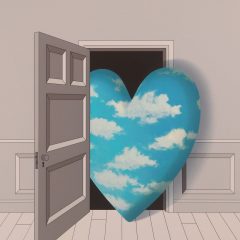 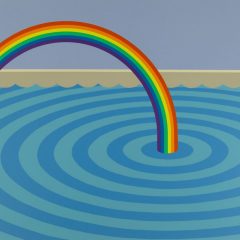 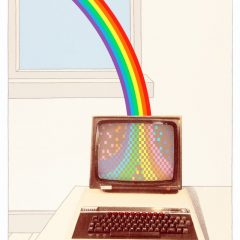 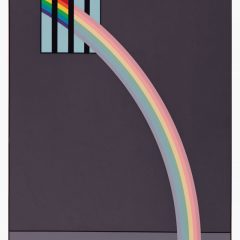