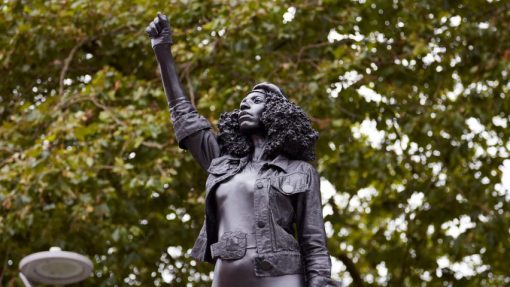 A Surge of Power (Jen Reid)

The art world is divided once again, but this time it is over Marc Quinn’s Black Lives Matter protester statue, ‘A Surge Of Power’ which will go down as an unforgettable moment for politics, history, art and race.

Marc Quinn is a British contemporary visual artist whose work is focused on sculpture art and what it is to be human in the world day. In the early hours of the 15th July in the bright and charismatic city of Bristol, a sculpture in honour of the Black Lives Matter movement took the place of slave trader, Edward Colston after it had been torn down by protesters and rolled into the Bristol harbour. The statue which now stands on this plinth is of Jen Reid, a female Black Lives Matter activist whose face and name was spread across the internet in the wake of the UK BLM protests as she climbed on the plinth which once belonged to the statue of the 17th Century slave trader and held holding her fist to the air. has been subjected to both praise and criticism.

Fellow artist, Thomas J Price who has been commissioned to make a sculpture dedicated to the Windrush Generation has argued against the recent work of Marc Quinn by stating to The Guardian that white artists should focus more on confronting whiteness instead of ‘the lack of black representation in art to find relevance for themselves.’ Price goes on to mention how he of course understands the many positive responses which Quinn has received, however this sculpture and political act is ultimately a ‘votive statue to appropriation.’

Although, author Bernardine Evaristo disagrees with the criticism and has commented on Quinn’s statue saying it represents ‘initiative’ and ‘allyship.’ She also celebrates how the statue is personal due to the fact it is not a publicly funded piece but rather the art is funded and has been installed by Quinn himself in the early hours so he could not be stopped. However, by installing the artwork without permission by the council, the mayor of Bristol has had no choice but to order the statue to be taken down. This has then lead to other artists questioning Quinn’s ego as Hew Locke told Artnet News that ‘the people of Bristol were not consulted, it feels arrogant.’

Banksy has one upped us all again as another public graffiti artwork was discovered on a Circle Line tube carriage. A camera crew filmed who is believed to be Banksy fully covered up creating the artwork and uploaded it to his Instagram a few days after with the caption, ‘If you don’t mask – you don’t get it.’ This recent piece is assumed not only to be Banksy’s response to the COVID-19 pandemic but to encourage those to wear masks especially on public transport as the lockdown is now easing.

Similarly, to the Marc Quinn statue, Banksy’s latest piece has also received criticism as well as celebrations. Critics have claimed that this act of ‘art’ seems extremely choreographed like many other stunts he has produced with previous works, such as the shredding of the ‘Girl With Balloon.’ However, others have praised Banksy for his carriage masterpiece as they believe it is spreading the crucial message of how vital it is to wear a face mask.

It has been said with both ‘A Surge Of Power (Jen Reid)’ and Banksy’s face mask underground piece that the art faced inevitable condemnation as Banksy’s piece was cleaned up and scrubbed away by cleaners not long after it was created.

Both iconic statements have caused a lot of controversy but there is one aspect that cannot be doubted and that is the fact that the face mask art and the statue of an everyday female, black protester will now be remembered as an iconic moment in history, whatever your politics. Demonstrating how art can be used to mark historical and political events.